Book: Rising Out of Hatred 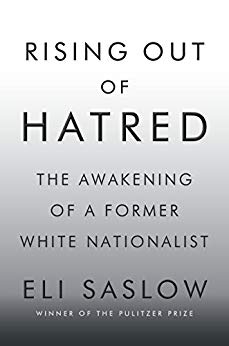 I really struggled to read this book. I have read many other reviews in which people complain that the author does directly note when he is quoting Derek or Don. In the author’s note at the back of the book, Saslow clearly indicates having spent hours interviewing Derek, Don, Allison, and many others for the book. He thanks them all by name. The writing style is meant to be readable and, thus, useful to discussion and reflection. A more heavily cited book- meaning dates of conversations, etc.- would not have been as readable or easily quoted.

The hardest part of this book for me was Allison’s relentless engagement with Derek. Her willingness to go all the way so that she might engage him was brave and compassionate, but also had to be exhausting. I definitely wanted to hear from her if she had ever drawn a line. If he had refused to renounce, if he had persisted in some of his beliefs, when would she have said, “I love you, but I can’t do this.” I understand the concept and healing possibilities of relationship, but I felt like I needed more about the long-term costs of her engagement with the ideology and confronting Derek on his whole history.

Additionally, I would really have liked a bibliography for this book. I realize that Saslow read things recommended by Don Black and David Duke, but it would have been good to have a reference list for people who may want to be the Allison to someone else’s Derek. Allison equipped herself for that fight, but Saslow did not help others to do the same.

I don’t know that Derek “rose out” of hatred. I think he was walked out of it. People came alongside him, at the risk of their own safety and mental well-being, and waited him out. They did not indulge him, but they also did not persecute him.

The fact remains, however, that the whirlwind that Derek sowed is still spinning and wreaking havoc, even as he has turned away from it. The children who imbibed his poisonous words years ago are now adults who do not have the same Allisons and Matthews to walk alongside them. This could be because they don’t live near them or it could be because they drove them away for any number of reasons.

This book underscores the danger of closed community and failure to critically examine what is presented as truth. Furthermore, it shows the very seeds of fear-mongering (with lies) that built the white nationalist movement in the United States. The real question is: will the present Dereks read this book and come to a new understanding of America’s possibilities or will they reject this book and double-down on ideologies that divide and tear apart.

Final comment: I find the cover art a poor choice. The shift from black to white, combined with the verb “rising”, implies that white is a more pure state than black. While I want to assume that no one designing the cover meant to imply such things, it is this kind of subtle pairing that continues to support a white/good, black/bad dichotomy.
I did receive a review copy of this book from Net Galley.

I also listened to the audiobook version, which did NOT include the author’s notes at the end.