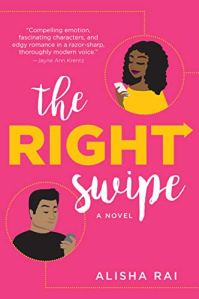 I wanted to love this book, but I didn’t. While the HEA/HFN did come through, there was so much left hanging in the air. It felt like a situation wherein I might have liked the people to agree to be friends because they were not in a position to be good as partners to anyone.

I like that Ri (Re?- the perils of audiobooks) is pursuing her own goals and is driven. Great. Yet, it felt like she couldn’t just have that be her motivation, it had to be in response to being hurt and that she wasn’t able to buy into her own persona when she was alone. She’s sharp enough to support her friend, to run her business, to make plans for marketing, but not to recognize her own trauma? We all have blindspots and I know not everyone has the same emotional intelligence or engagement, but it felt very imbalanced to have the end outcome be believable.

As for Samson, I liked him as well. His grief was real. Given the realities of the sports-themed plot line, I was surprised not to see Samson grapple with how the issue might have physically affected him, not just the people he loved. Toward the end of the book, it felt like that might have been a possibility, but then it didn’t become part of the plot arc.

Annabelle was portrayed one way at the beginning of the book, such that I thought I knew what to expect. Her behavior toward the end surprised me, not that a person or character cannot be surprising, but it felt very out of character for what I’d been led to believe.

Maybe, all in all, I need this book to either be longer to let all the plots shake out or shorter with at least one less plot line.

I’m glad I got the book from the library because it was worth reading, but I am relieved not to have spent money on it.