When I wrote this review for RevGalBlogPals, the verdict in the case mentioned below had not yet been decided or announced. The day after this review posted, it was announced that the police officer who shot Philando Castile was acquitted. The officer shot Castile who was seated in a car next to his fiancee and in front of her four-year-old daughter. The film of the shooting was released the next week. The painful truth that continues to be all too evident is that Castile was killed for being black. The only threat he presented to the officer at the time of his shooting existed in the officer’s mind. The work of speaking the truth about racism, racist systems, power and privilege, and the absence of life, liberty and the pursuit of happiness for the majority of people with black and brown skin is not over. In fact, I don’t feel confident in saying that, for many white people, the work has even truly begun.

This is the book: The Hate U Give. 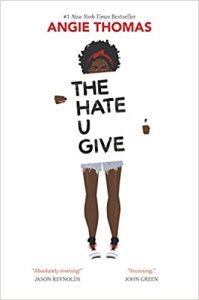 Click the link above. You can buy the book today. You can be finished with it in two days. At the latest.

You will have read of Starr’s friends and their reactions. The was casual white privilege and intentional white sensitivity cut at her in a time of grief. You will laugh hard at some of the conversations, especially the fight during a prayer, and you will weep at the pain of many of the characters.

I have been trying to figure out how to start a Young Adult book club at church, not only for the purposes of reading YA literature, but also to have discussions with high schoolers and young adults about some of the issues in the world. The Hate U Give would open up so many doors for conversations regarding race, power, privilege, and social and family dynamics.

Starr and her friend, Maya, are talking at one point about a third person, Hailey, whose racist statements and actions have hurt them both. As they reflect, Starr tries to think about how long the behavior has been going on:

That’s the problem. We let people say stuff, and they say it so much that it becomes okay to them and normal for us. What’s the point of having a voice if you’re gonna be silent in those moments you shouldn’t be?  (252)

The narrative moves very quickly, mainly because it is a character-driven plot. In Starr’s world, as in most people’s, there’s never only one thing at a time happening. The grief over a death is entwined with other concerns, frustrations, and needs. The waves of reactions to Khalil’s murder and to Starr as the witness reveal how deeply these issues cut and how widespread the pain is.

As I write, we are waiting for a verdict in the case regarding the death of Philando Castile. We wait to see if the officer who killed him will be convicted. We wait to see if death is the normal conclusion of being pulled over for a broken taillight. I would push harder and ask if we should entertain that idea, but it seems to me that present-day America is no longer entertaining the normalcy of black people dying at the hands of the police, but we’ve invited to move it in and stay permanently. It is hard for me to believe that anything different will happen in the case of Philando Castile in the same way that I doubt anything regarding gun violence (or white male terrorism) will happen following the shooting of Congressional baseball players in Alexandria yesterday.

Back to the book. I may not believe that things will change, but that does not mean I will remain silent about their wrongness. I believe The Hate U Give is and will be a seminal book in communicating the pain and trauma that occurs following one of these shootings. It will open a curtain into a world that many people feel free to discuss, but do not know.

The only struggle I see with this book is that the reader must be woke or willing to be woke to trust the truth of the story. Starr proves throughout the book that she is a reliable narrator. As a character, she is reliable and truthful within the context of the story, which conveys her reliability to the reader. Yet there are people, personified in Hailey, who will choose not to believe Starr’s story. And rejection of her story is essentially rejecting the stories of other witnesses, dead and alive, who still proclaim that we can’t reach equal when so many people are willing to kill for separate.