It is the rare children’s book that has a surprise ending. My mother-in-law sent The Most Perfect Snowman to my four-year-old for her birthday, among other books and toys. It was the first book that the birthday girl picked to read and so we snuggled in- a seven year-old 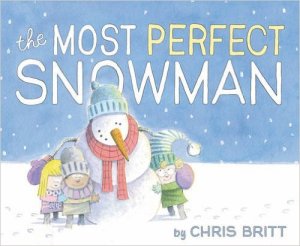 Drift is a perfectly good snowman, but he was made in the beginning of the snow season and forgotten. He doesn’t have the accessories of the other snowmen and everyone knows it. When he eventually gets a hat, mittens, and other snowman accoutrements, he has a wonderful day. (Did the absence of clothes keep others from including him or him from wanting to participate? Was he naked?)

The conclusion of the story, though, is more than just what he does with his accessories, but why he does what he does. Ultimately, this is another children’s story about what you do with what you have and what is most important. However, the lesson happens as fleetingly as a day of play in the snow. It’s not hit hard, just a resonant ping that reverbs after the book is closed.

My children wanted to read the book the next night again. They giggle at the ending, but still understand what the book is saying. The illustrations are lovely watercolors, so this is a very wintery-looking book. The writing is smooth and understandable. Each page conveys a message in the words and in the pictures, which means a non-reader can still tell the story.

I’m so touched by this book and I can’t stop thinking about it.