Most white people lack the language to talk knowledgeably about race and class in the modern United States. Even the most woke white person doesn’t know what she doesn’t know (unknown unknowns!). Having the humility to admit this and that you can be very wrong in what you do know takes nerves. I am steeling my own nerves to admit that there is a vast reality of about living Black in America that I do not know. Even as I work to listen and learn, I am still within my own framework, branching out and trying to break through walls of privilege-based prejudice and bias by growth and grace. 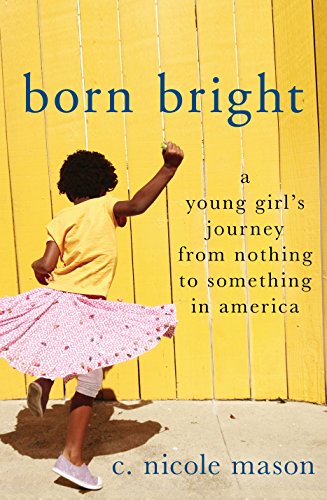 It is through this lens that I read Born Bright: A Young Girl’s Journey from Nothing to Something in America by Dr. C. Nicole Mason. In many ways, I understood her story because I had some intersections with the narrative: intelligence, underfunded school system, family
financial troubles, surrounding areas of poverty. However, her experience cannot be separated from her race and the history of racism against black people in America. She grew up in LA, but it is not enough to think poor/black/urban. That mindset puts Mason’s experience, and that of so many others, in a binary of choice and birth, but the blocks that racism builds around black Americans mask the vista beyond that binary and are a continued effort to keep black Americans (and other people of color) as a minority, if not in numbers, then in prosperity.

Dr. Mason writes in her introduction:

Born Bright is about how, through keen observation and what at times felt like peeping through an opaque window of someone else’s home, I learned the systemic and structural rules of the game, the often complex and unfamiliar rules of engagement. It is also about how others in my life did not. Along the way, I make the case that success and opportunity in the United States are shaped much less by hard work, intelligence, or aspirational drive than by conditions under which individuals are able to pursue success and opportunity, the social capital gained through personal connections, and mastery of the institutional and structural rules of engagement in our society. Individual effort, determination, and possibilities are only a part of the equation. (10)

Born Bright is extremely readable as a memoir, even in the starkest and most painful realities. Part of what makes it such a page turner is that Dr. Mason writes from how she perceived her world as a girl. She saw poverty in other people’s lives, but did not perceive it in her own. She experienced trauma and pain at home, but didn’t categorize herself as abused. She witnessed threatening and terrible situations in her house and neighborhood, but did not perceive herself to necessarily be in danger.

Her recounting could be viewed as naïveté: “How could she not know these things?” If the reader thinks that, it is a good time to stop and check one’s own privilege and experience. How do you know that being beaten all the time is abuse? Someone tells you that it is. Someone teaches you that. Someone explains what that behavior is wrong. If no one tells you that, if no one around you intervenes, if no one else has a different experience that they offer as a counter narrative, then your experience is your usual. Usual becomes normal. Normal is what you know and abnormal (in this case, being hit) is almost unfathomable. Yet, we often expect children and some adults to comprehend and fight for a normal that they have no reason to know exists.

Instead, the normal of poverty is shaped by an expectation of “achievement” that is the equivalent of showing someone a square of concrete and telling them to make a garden, but only dirt will be provided. Or maybe seeds with no dirt. Or maybe fertilizer and a hoe, but nothing else.

In the lives of most poor people, three systems are omnipresent: the criminal legal system, the social service system, and the educational system. On a daily basis, poor people interact, in mostly negative and dehumanizing ways, with these systems. In a very real way, their lives are regulated by these systems, which historically have caused them more harm than good. (60)

Dr. Mason’s story illustrates how the life of a black student in poverty is more than the sum of her choices and those of her parents. It is factorial reality of funding decisions in a municipality, over- and under-policing, teacher burnout, race-based expectations and education standards, inequality in infrastructure in poorer neighborhoods (including libraries, transportation, and landscape), and many, many other daily choices by people in power (NOT people in poverty) that compound racist, classist, and sexist ideals into policies and procedures.

As Dr. Mason neared the end of high school, she realized that her white classmates (against whom she had been measured and was always expected to be found wanting) had information she did not have. There was a second (or third) language that was spoken in their home- one of collegiate expectation and information. She perceived this most clearly when she visited a school fair.

I did not know how to sort through all the information on the tables or what criteria I should be using to decide which schools would be a good fit for me. The school representatives, while eager to help, grew annoyed with my lack of understanding of the process and my seemingly rudimentary questions. I did not know what a major was or what I planned to study. I was unfamiliar with the financial aid and application deadlines. I realized in that moment that I knew very little about going to college and all it would take to get there. (204)

For me, the end of the book was nearly a cliffhanger. I wanted to read more about what happened and how she achieved what she did. Not in a voyeuristic way, but because the few people who really helped her stood in out in such stark ways that 1) I thought about the people who did that for me and 2) I want to be sure that I know how to be that kind of person in turn for students of all races and backgrounds around me.

The gift of Born Bright is that one can read it swiftly, but not miss its powerful punch. Dr. Mason’s story-telling gift weaves her sociological insights into her history so that they do not interfere with the pacing of the narrative. At a time when many white people- of all educational levels and backgrounds- are surprised and confused by the on-going realities of racial tensions and racist actions in the United States, this book can and will help any reader realize the invisible fences of racist and classist action that are very much in place and in use in the country today. Not in the past, but today.

It is only by comprehending that our problem is systemic that we can even begin to address it truthfully and then begin to seek to dismantle it and build something that actually works. The recognition of systems, including how one benefits from being part of a flawed system, is painful work, but it is important and necessary work. And it cannot wait.

I borrowed Born Bright from the library.