I received a copy of this book in exchange for an honest review. 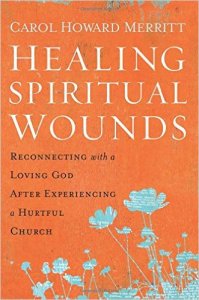 I posted a review for a different audience here.

Often when I review a book, it is then in my rearview mirror because I have so much to read and so little time. Occasionally, though, there is that book that stays with you. You know the one. The one that you can’t stop thinking about. Or maybe recommending. Or sharing.

In my case, I have been mulling over Healing Spiritual Wounds: Reconnecting with a Loving God After Experiencing a Hurtful Church for about five weeks now. Carol Howard Merritt has written a thoughtful book on how a person can recover their sense of self in God, apart from the religious structures that created ruptures, rifts, and rips in that relationship. There is a denomination in my past and a couple specific churches within that denomination that have created swinging scars in my spiritual self.

Merritt writes a phrase in her book. In the middle of her helpful structure of healing, in the center of carefully crafted and wholly useful exercises, there is the phrase that moves the most. The phrase that has actually kept me awake staring at the ceiling, in prayer, wonder, and tears.

She describes the challenge of trying to proselytize to people, leading them to new faith (or renewed faith) in Jesus. After realizing that she might not be skilled at the confrontational message, she tries a sideways approach. She offers to sketch people.

Though I had not added a single notch to my evangelism belt, I did learn to see people. Waitresses, clerks, and patrons were no longer extras in my life’s drama. Instead they became three-dimensional solid beings on their own. They became characters independent of my own religious intentions for them or my need to control their fate. They were people weighted with entire histories of love, loss, passion, and betrayal.

Then it hit me. Through the practice of evangelism, I realized I was hurting people with the premise of my evangelism. I thought that we all deserved to go to hell. I imagined an eternal torture worse that solitary confinement for people who were basically trying to live decent lives. (p. 108, emphasis mine)

I think of that sentence- the premise of one’s evangelism through how one’s good news is shared. The denomination of my childhood had a similar focus for evangelism- a goal-oriented ethic focused on resurrection destiny- special words and special, happy ending. No special words, horrible, horrible ending.

While I haven’t believed in that for a long time, it has always been that I felt as though I was a “bad” version of the Christian I was supposed to be. My good news is focused in the power of God’s inseparable love for creation and the wideness of the mercy that is the defining expression of that love. I needed words for how to describe this realization and marking its change in my understanding.

Merritt also gives some helpful advice on how to be grateful for what one learned in the religious places that gave shape to a zeal that one no longer owns. I am grateful for the way I learned to read scripture, to commit parts to memory, and the vast Rolodex of hymn tunes and lines I have in my head. I am sorry that those things couldn’t have come with a support of the teaching and preaching skills of women in the congregation, expressions in how to love one’s body, an appreciation of healthy and safe sex as a gift from God, and an open welcome to all people. Healing Spiritual Wounds has given me words and space to articulate these things

I reviewed this book originally to share it with people who might need it. It turns out that I am one of those people. And I can say that it works.